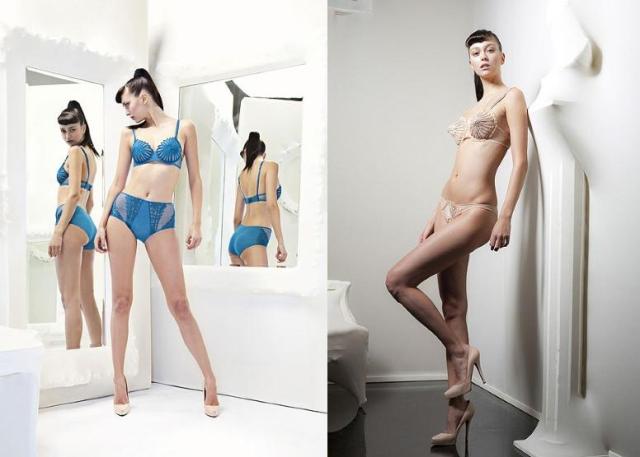 When La Perla announced its collaboration with Jean-Paul “inventor-of-the-Madonna-cone-bra” Gaultier, we didn’t exactly rush for the nearest waiting list.  La Perla don’t cater for the DD+ boob, and a JPG collection of creative, architectural lingerie was not going to be the place for them to start.

But now the blue bra is giving me major small boob/fat purse envy, and though I’m not that fussed about the ‘clubwear’ the range as a whole is rather beautiful.  I confess, I’ve been wondering: would a G-in-a-cone be so terrible?

Armed with some crudely hashed GCSE maths extensively thought out and well prepared calculations, I can estimate that just one of my G-cones would have the capacity of about 1.25 litres, and its perpendicular height would be great enough to stab people on the tube.  A health and safety nightmare, you say.  But, I argue, not entirely without use.  With that kind of reach and point you could exact a very fitting revenge on anyone caught leering.  You’d never be short of a skewer on the go.  And that kind of capacity must be extremely useful for picnics…

Who am I kidding? G-cones would excel only at making a fulsome chest look one tusk short of a triceratops.  As ever, we must content ourselves with the impending spring/summer collections and hope for the best.  One day, perhaps, our cones will come.