Turn your back on Page 3 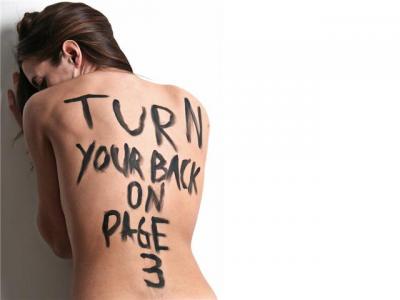 It’s fair to say we women have come a long way, baby. We have the vote. We have education. We have control over our reproductive destinies (although there are some seeking to challenge this – don’t get me started *fumes*). But in spite of the fact that I can now do anything a man might without fear of being burned as a witch, we still have topless women on the third page of tabloid newspapers.

Defenders of Page 3 herald it as a British tradition, but it – and the culture of misogyny within the tabloids that goes with it – is totally anachronistic in a society that would claim to regard women as equal. Workhouses and Jacobean ruffs are part of British tradition too: it doesn’t mean we still have to have them.

25 years after the first challenge in Parliament, Page 3 still exists. As does inequality in the boardroom, underrepresentation of women in politics, and VAT on tampons. It’s time to fight back. A recent review recommended sexual images in lads mags and newspapers be removed from the sight of children, campaign group Object are working hard to kick sexualisation of women right in the bald and shinies, and now campaign group Turn Your Back on Page 3 are tackling The Sun on their own turf.

Turn Your Back on Page 3 isn’t new, but after years of not getting the recognition it arguably deserves it’s now upping its game: hi-jacking The Sun’s campaign to find a new Page 3 star. TYBOP3 isn’t about being prudish, or conservative, or even anti-porn in its mission to get boobs off the breakfast table. It’s about getting this harmful, insidious culture of misogyny out of our press – not just in The Sun but in all of the equally guilty red-and-blue top tabloids.

And what better time to challenge the tabloids? The integrity of tabloid newspapers has never been as scrutinised and questioned as it is in the current climate. The News of the World has shut down completely, and people are horrified by what seems like a total absence of moral compass in some journalists. It’s fascinating, but really, are we surprised? Each week the News of the World was stuffed to the gills with the sort of woeful sexism that reduced women to mere objects: constant scrutiny of famous women’s figures and articles about weight loss, salacious sex scandals which delight in calling women without fame, power, or a voice ‘tarts’, and rallying cries against things like bras supposedly marketed for children whilst simultaneously speculating about whether Miley Cyrus is wearing underwear and printing full page pictures of topless teenagers. Phone hacking is but a symptom of the same problem. These papers dehumanise everyone. On no level does this contribute to a society being fair, equal and respectful towards its members. Page 3 is an archaic symbol of this endemic objectification. Isn’t it time for a change?

Join Turn Your Back on Page 3 on Facebook to find out how you can subvert The Sun’s latest competition to be a Page 3 model, or follow feminist activist group Object for more campaigns against the objectification of women.

And for a bit more inspiration – this is an old but genuine spread from The Star. On the right, lambasting satirical comedy Brass Eye’s ‘paedophile’ episode. Opposite on the left, a feature on the then 15 year old Charlotte Church’s developing chest… It’s old, sure, but things have not changed. Enough please!

1 Response to Turn your back on Page 3