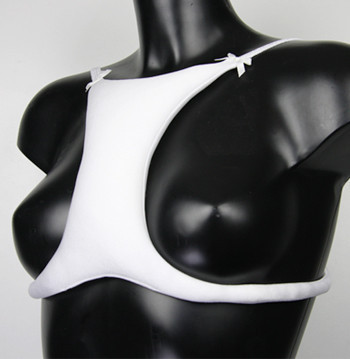 I haven’t ever spent much time thinking about bra wrinkles, but on considering this solution – the La Decollette ‘wrinkle smoothing bra’ invented by Dutch woman Rachel de Boer – they can’t be more unsightly than the prospect of going to bed wearing this every night.

The bra, which helps prevent the vertical creases caused by your unsupported boobs squishing together when sleeping on your side (damned insubordination), retails at $72, and is the product of seven years of sleeping with a bra stuffed with socks on.

I’ve just spent five minutes in deep contemplation with the skin between my boobs.  My conclusion?  That’s five minutes of my life I won’t get back. My skin is smooth, though I notice when I move it around that it’s not as flawless as it was ten years ago.  I’m not exactly gripped with panic. Ten years ago, I was an eighteen year old girl with eighteen year old skin and eighteen year old experiences.  I’d be looking for signs of vampirism if everything I’ve crammed in to the last ten years hadn’t had any impact on my cells.  Similarly, with my face and my arse together, at thirty-eight I expect to be wearing ten years worth of wrinkles more.  With ten more years of life as compensation, I think I can handle that.

Of course there are women who are desperate for support when they sleep, but that’s a totally different issue: it’s being marketed as an anti-wrinkle bra, not a pro-boob comfort bra. And I can think of  better things to be doing with our time, money, brain space and bedtimes than worry about another inconsequential and inevitable wrinkle.  I can’t help but think that not sweating the small stuff is one of the best defences against premature ageing. Why fight the tide when you can ride on the surf?

I think Mitchell and Webb sum the state of things up:

5 Responses to JUST LAUNCHED: brand new thing to worry about.